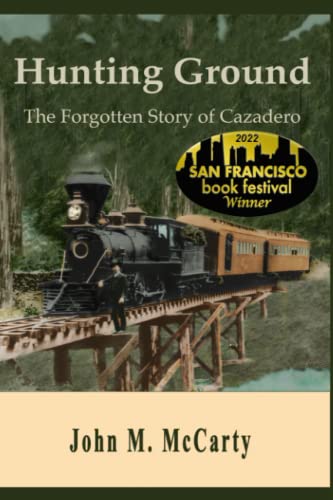 An evening with award-winning Russian River Writer John McCarty. John will read from his most recent historical novel: Hunting Ground: The Forgotten Story of Cazadero.

‍Hunting Ground: The Forgotten Story of Cazadero is based on the true story of divine healing evangelists who square off against moonshiners in 1890s along the lower reaches of the Russian River.

George Montgomery was a two-fisted drinker, seducer, and a member of San Francisco’s Bohemian Club.  His connection with the fraternity prompted him in 1888 to purchase a small logging town along the Russian River in rural Sonoma County, naming it Cazadero. With a world-renowned evangelist as his bride,  he changed his ways and sought to abolish alcohol in the area.  Country bumpkins, moonshiners, and good ol’ boys, however, had a different take on how things should move forward.  Sinners squared off against Bible thumpers with fate deciding the fatal blow. Inspired by his family’s imprint upon northern California folklore since 1870, John McCarty creates unique characters and sends them off on an adventure thru yesteryear over the beautiful landscape of San Francisco and Sonoma counties. His tales brim with local yarns and antiquity, reflecting his thirty-year career as history instructor and researcher on both the secondary and graduate levels. John is affiliated with the San Francisco-, Sonoma County- and Russian River Historical Societies. He is also a member in good standing with Redwood Writers and the Fulbright Association. With an abundance of city and country rascals at his disposal, our author’s single concern is to make sure that the ridiculous truth does not plow over fiction.

John is available for book signings and readings, classroom visits, book club appearances, rotary and chamber gatherings, local art and holiday festivals, and historical dedications. Please use the form on the “Contact” tab to make requests.